In this tutorial you will learn the concept of Document Object Model, or DOM.

The Document Object Model, or DOM for short, is a platform and language independent model to represent the HTML or XML documents. It defines the logical structure of the documents and the way in which they can be accessed and manipulated by an application program.

In this chapter we'll cover the HTML DOM which provides a standard interface for accessing and manipulating HTML documents through JavaScript. With the HTML DOM, you can use JavaScript to build HTML documents, navigate their hierarchical structure, and add, modify, or delete elements and attributes or their content, and so on. Almost anything found in an HTML document can be accessed, changed, deleted, or added using the JavaScript with the help of HTML DOM.

The above HTML document can be represented by the following DOM tree: 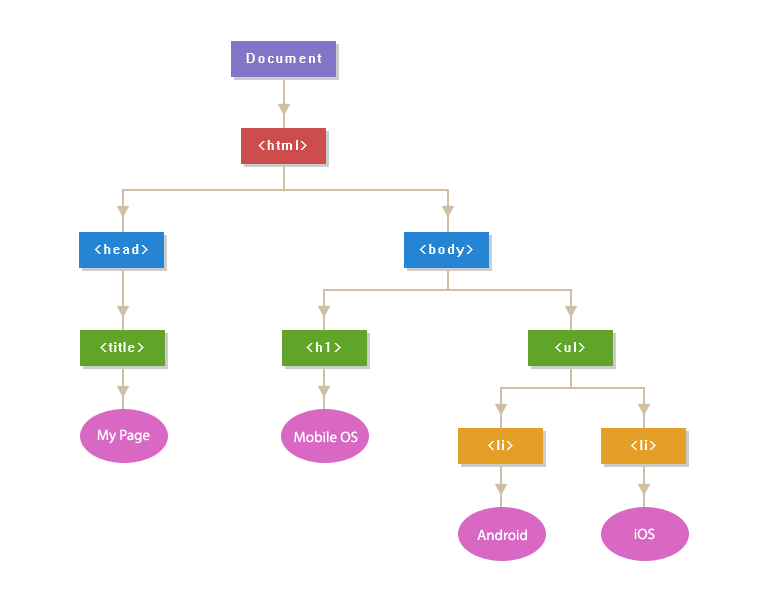 The above diagram demonstrates the parent/child relationships between the nodes. The topmost node i.e. the Document node is the root node of the DOM tree, which has one child, the <html> element. Whereas, the <head> and <body> elements are the child nodes of the <html> parent node.

Comments inside the HTML document are nodes in the DOM tree as well, even though it doesn't affect the visual representation of the document in any way. Comments are useful for documenting the code, however, you will rarely need to retrieve and manipulate them.

HTML attributes such as id, class, title, style, etc. are also considered as nodes in DOM hierarchy but they don't participate in parent/child relationships like the other nodes do. They are accessed as properties of the element node that contains them.

Each element in an HTML document such as image, hyperlink, form, button, heading, paragraph, etc. is represented using a JavaScript object in the DOM hierarchy, and each object contains properties and methods to describe and manipulate these objects. For example, the style property of the DOM elements can be used to get or set the inline style of an element.

In the next few chapters we'll learn how to access individual elements on a web page and manipulate them, for example, changing their style, content, etc. using the JavaScript program.

Tip: The Document Object Model or DOM is, in fact, basically a representation of the various components of the browser and the current Web document (HTML or XML) that can be accessed or manipulated using a scripting language such as JavaScript.